The Timer is a redstone circuit added by the RedPower mod. When placed, it will wait for a player-specified interval before outputting a redstone pulse on 3 sides. By default it will output a redstone pulse every 2 seconds. However, the timer can be customized to wait for any length of time the player wants before doing this. In addition to its one redstone input (which only stops the timer), the Timer also uses 2 of its outputs as potential inputs which can also stop the Timer (see picture below).

Timers are synchronized to the world time. Consequently, any action which changes the world time (like sleeping in a bed) will alter its state, usually resulting in an immediate pulse of the timer, regardless of how much time remained before the time change occured. In most circuits, this will not matter or have little effect, but certain time-critical circuits will have unpredictable behavior because of this quirk. 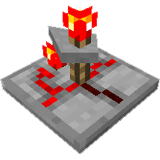 Traditionally whenever the player wanted to build any mechanism that had to perform tasks at a specific interval, a clock circuit was needed in order to emit strongly timed redstone pulses. These clocks were usually large and in some cases required manual resets by the player. They were also stiff by design and changing the rate at which the clock ticked usually required reconstructing whole parts of the circuit (if not all of it). The timer simplifies and abstracts the clock circuit to a single block that can adjusted and switched on and off. Like all Redpower circuits, the timer can be placed on walls as well as on the floor.

The Timer can be changed from a minimum of 0.200 of a second to a huge amount of time between pulses. Right clicking on the Timer will open an interface with the delay between pulses, along with 6 buttons, adding or subtracting either 10 seconds, 1 second, or 0.050 of a second. Activating a (for example) lever connected to it via redstone or red alloy wire will stop it, until the lever is turned off. This can be great when using a transposer or other Redpower2 machines that require an alternating restone current. This is the most frequently used circuit for running transposers/filters moving items in/out of chests/machines, and is essential to the Redpower Pneumatic Tube system.