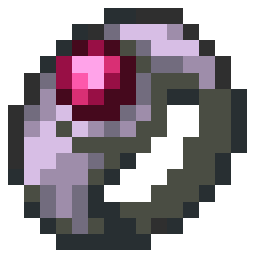 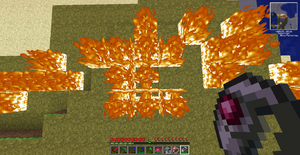 The Ring of Ignition is a power ring from Equivalent Exchange with powerful destructive capabilities.

1) Left clicking with the ring will fire a projectile that bursts a 3x3x3 area into flames, directly. Doing so consumes nothing.

Note: this function currently does not work in Survival Singleplayer due to an unknown bug. On some servers, it also will not work properly in Survival Multiplayer.

2) Pressing R or Right clicking while you have a charge will lay down a long "wall" of fire. The distance ranges from 3 to 30, 3 per charge level, of which there is a maximum of 10.

3) The ring-bearer is immune to lava and fire while wearing it (on the hotbar) and the ring will attempt to extinguish any flames in a 3x3 square around the player, removing the visibility issues with constantly being on fire. Previous versions only extinguished one panel in an attempt to reduce the visibility issues produced by being on fire all the time. Since a player can bridge two panels at once, however, it was a bit limited in effectively improving visibility.

4) Pressing G activates the ring. Every 10 seconds, the ring will consume 1 Redstone Dust. During this state, the area around the player will constantly erupt into flames. Mobs will suddenly burst into flames and take fire damage, and blocks will catch fire constantly. The damage mobs take from the immolation is quite intense, and frequent (even if sporadic) - expect nearby creatures to die rather rapidly. If they don't die straightaway, the long-duration fire debuff will likely be the finishing touch.

Note: Obsidian will turn into Lava when lit on fire with the Ring of Ignition.

Categories:
Retrieved from ‘http://tekkitwiki.com/w/index.php?title=Ring_of_Ignition&oldid=32360’
Cookies help us deliver our services. By using our services, you agree to our use of cookies.